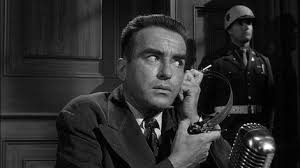 After a disastrous automobile accident, Montgomery Clift was never the same.  He was once referred to as the longest running suicide in history.  By the time he made "Judgment at Nuremberg," he was having trouble remembering lines.  This amazing scene from the film came from Clift's confusion.  The director was so frustrated with Clift's inability to rememer his lines, he told him (Clift) to just grab for a word from the script and improvise.  When he ran out, grab for another word.  Clift did this and the scene is just one of the best things I've ever seen in a film.  If you haven't watched Judgment at Nuremberg recently, find a copy and do so.  It's just a great film.